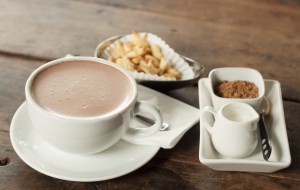 Since cocktail parties have gone the way of the DoDo bird, try a hot chocolate party instead. Everybody loves it, and you’re part of a long tradition — hot chocolate was reportedly served at Catholic mass in Spain ages ago. (And you thought folk mass was something?)

(Faith Note: You can skip all this and follow the super simple recipe on packages of spicy, inexpensive Ibarra chocolate from Mexico, often found at Whole Foods, Latin markets, Citarella, and other food stores. By the way, I really do sprinkle the top of plain whipped cream with crushed dark chocolate-covered pretzels. Crazy good paired with hot chocolate.)