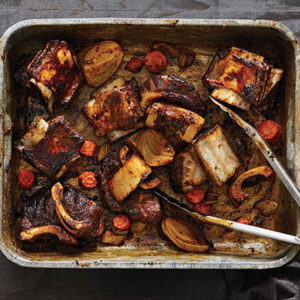 Beef-bone broth has become all the rage in recent years, due to the popularity of the Paleo diet, one that promotes eating lots of meat as well as this type of rich, nourishing broth. It is said to have all kinds of health benefits, since it’s rich in protein, gelatin, and anti-oxidants.

You can sip it as a protein-rich snack or meal all on its own or you can strain the broth, discard all the vegetables (the meat should be tender and still full of flavor), and use it as a base for any meat soup. For drinking the broth on its own, cook it for the full 3 hours. If you are using it as a base for other soups, simmer it for 1 to 1-1/2 hours to avoid overcooking the meat, which you’ll be adding to the soup.

RECIPES: What to do with this broth? Use the homemade beef broth as the base of Kathy Gunst’s French Onion Soup and Sicilian Black Lentil Soup. 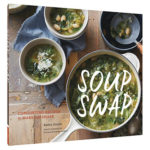 ON-DEMAND: Listen to Faith and Kathy talk about this nourishing broth as well as how to start a soup swap of your own.  Please support The Faith Middleton Food Schmooze® and all of WNPR’s programming by swapping a pledge of $8 a month for this book. Make your pledge now. Thanks. 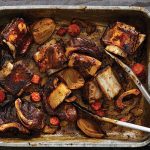