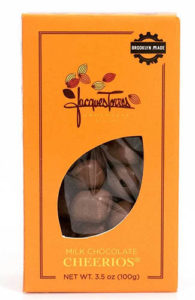 Somehow cereal came up in our recent conversation about how to create instant desserts, using pretty much the ingredients in your fridge or pantry. Blame it on that classic, Rice Krispies Treats.

Seems easy enough to do at home, right? Just skip Faith’s attempt at Chocolate Covered Corn Flakes. Through abundant laughter, she described her creation as a dinner party flop. Lesson learned. We WILL be trying the Chocolate Covered Cheerios, though!