Having calorie-light food doesn’t mean you have to be unhappy; that’s why we’ve chosen this mouth-watering fresh tuna tartare featured in the Slanted Door cookbook by owner and chef Charles Phan. One of the leading lights of San Francisco’s culinary scene, The Slanted Door is a must-go restaurant. (When she led a food tour of WNPR listeners to the Pacific Northwest, Faith insisted on a group stop at The Slanted Door; it was remarkable).

What’s interesting about this tuna tartare recipe is that it’s not a ceviche, which uses citrus juice to “cook” the fish chunks; instead chef Phan recommends this version, more like a Hawaiian “poke” that calls for soy sauce rather than citrus. It’s heavenly. You feel like lifting weights when you’re done. 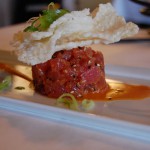