I prefer homemade naan to the dense and doughy store-bought ones. It’s so easy to whip up; you just need to plan ahead so the dough has time to rise. I use whole-wheat pastry flour to make naan because it contains more fiber than all-purpose flour but less gluten, which helps produce a softer bread. The naan dough is actually a twofer, because you can use it as a base for flatbread pizza. While the choice of toppings is endless, Margherita pizza sprinkled with nigella seeds is my favorite way to eat up all those colorful little tomatoes we grow in our backyard. 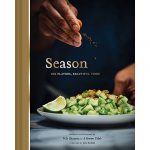 Reprinted from Season by Nik Sharma with permission by Chronicle Books, 2018.

Naan
Naan can be seasoned in many different ways. Instead of garlic, you can try mixing butter or ghee with spices and herbs, such as Aleppo pepper flakes, urfa biber, crushed coriander, and oregano.
Ingredients
Servings: flatbreads
Instructions