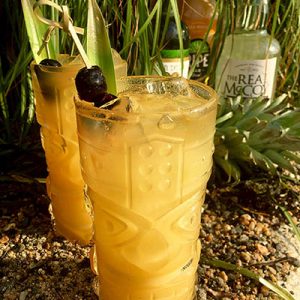 National Rum Day is August 16. We’re celebrating with Bailey Pryor of The Real McCoy spirits company in Connecticut. He’s invented a cocktail called “Faith in Tiki” and it’s delicious. Plus, more corn on the cob tips (because you can’t have too many), an affordable white wine from Italy, and the wildly entertaining and very talented Chef Rossi. A play based on her memoir The Raging Skillet is at TheaterWorks in Hartford right now. Get your tickets while you can. Also this week, Noah’s in Greenport, LI gets a shout-out.

MUSIC:
• “Can’t Stop the Feeling,” Justin Timberlake
• “Will His Love Be Like His Rum?,” Harry Belafonte
• “Beans and Cornbread,” Louis Jordan and The Tympany Five
• “Rum,” Brothers Osborn
• “Feel It Still,” Portugal. The Man.
• “Everybody Eats When They Come to My House,” Cab Calloway