When senior contributor Chris Prosperi made these mashed potatoes we went crazy. They’re rich, creamy, and oh so perfect for turkey, or anything for that matter.

Chris says it’s important to remember not to overcook the potatoes. Overheating causes the starch cells to burst and can make the potatoes gummy. For best results, Chris says, cook your potatoes at a slow boil and drain them well. 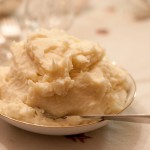