You try things; you win some, you lose some. But this recipe, it seems, is an alarm-bell winner, based on the reactions of countless friends who’ve had it. And since I cook food as a gift to my guests,  nothing makes me happier than offering them something that turns out to bring them joy.

I came up with what I call BLT Chicken by making a salad and adding things I love, things that swing together like great jazz — chicken, fresh corn, tomatoes and, I thought, why not — let’s butter and grill the cornbread. Grilled cornbread has a crispy edge that makes me buckle in the knees, caramelized and buttery on the tongue.

Listen, you’re free to make the cornbread on a weekend, when there’s time to do it from scratch, but you can also buy it, using the supermarket as your prep chef. That’s what my pal Jacques Pepin does; he buys supermarket stuff pre-chopped to save time. I mostly buy the cornbread made. It’s okay to use a packaged mix, or pull out that time-honored family recipe. In fact, you can prep most of this recipe on a Sunday night for Monday supper, including washing the greens, dicing the scallions, making the dressing, preparing the fresh corn and slicing off the kernels, and cutting the cherry tomatoes in half. 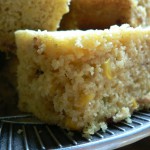 Seriously, I'd make double the cornbread. It's freaky delicious.