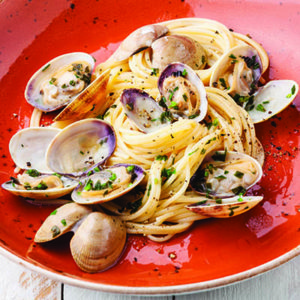 This traditional New England Italian-American dish goes all out in terms of flavor with its fresh clams and strips of sliced Genoa salami blended into the pasta sauce.

Get the scoop on a few of our favorite seafood markets in Connecticut, Rhode Island, and more, and hear local author Mike Urban describe more seafood recipes from his book in this recent episode of The Faith Middleton Food Schmooze®.

Recipe excerpted from The New England Seafood Markets Cookbook by Mike Urban, published by Countryman Press, ©2016. Photo by Lisovskaya/iStockphoto.com, courtesy of the publisher. 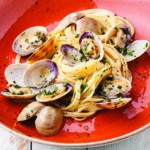 Linguine with Littleneck Clams and Genoa Salami
You'll want to serve this dish with crusty bread to sop up the flavorful sauce left in each bowl.
Ingredients
Servings: people
Instructions