We have Alain Ducasse to thank for the idea of making latkes as large as dinner plates. He suggested these years ago in the New York Times as a raft for stews, and Faith has been featuring the idea every Hanukkah ever since. This time our latke recipe is from The Smitten Kitchen Cookbook by Deb Perelman. Of course you can make latkes any time of year and add in your choice of flavors, from grated cheese to cilantro and more. Deb Perelman makes a giant latke for brunch, then tops it with a fried egg. We think it’s a perfect base for our featured recipe, Italian Beef in Barolo Wine from PBS cooking star Lidia Bastianich. 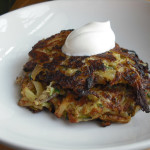 Do ahead: Latkes are a do-aheader's dream. You can also keep the latkes warm in the oven, on low heat, for an hour or more, if you're waiting for stragglers to arrive. If already cooked, they keep well in the fridge for a day or two, or in the freezer, well wrapped, for up to 2 weeks. Reheat the latkes in a single layer on a cookie sheet in a 300-degree oven until they're crisp again.

Bonus: If you undercooked them a bit, or didn't get them as brown as you'd hoped, you can compensate for this in the oven.

Cooking note: For neat edges and a thinner rostilike appearance, you can press each pancake into a 6-inch skillet and proceed to cook according to directions. For lacy, craggy-edged latkes, form the pancakes in a larger pan.