Here’s a way to thrill your pals for The Super Bowl or any weekend gathering. This recipe is a favorite of mine, adapted from a recipe by the very talented Melissa Clark, and originally published in The New York Times Essential Cookbook.
—Faith Middleton 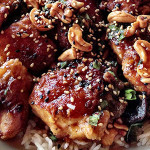 Spicy, Garlicky Cashew Chicken
I’m a cilantro lover, so I’ve upped it in my version, but also turned the heat down a notch, omitting the jalapeño pepper seeds, since I often double the recipe to feed a crowd.
Ingredients
Servings: people
Instructions
Recipe Notes

The recipe can be doubled to serve 8.