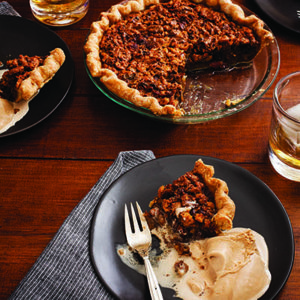 Think of this as breakfast morphed into dessert: maple syrup, bacon, waffles—if they were served with vanilla malt! This is a stellar pairing of flavors, nothing held back. Don’t even think of using a fine-grade maple syrup like light or even medium amber. Go for the robust, dark stuff to stand up to the excesses.

Listen to Mark describe this recipe on The Faith Middleton Food Schmooze®.

Bacon-Maple Walnut Pie and Malt Frozen Custard
Even if you like your morning bacon limp, fry it crisp enough that you can shard it into pieces. These will soften in the pie, providing a distinctly porky flavor to go with the walnuts and maple syrup. You don’t want to burn the bacon—doing so can add unpleasantly bitter notes. But get it crisp enough to stand up to the long baking time and still release lots of sophisticated, caramelized flavor without ending up as chewy, rubbery bits.
Ingredients
For the crust
For the filling
For the Malt Frozen Custard (Makes About 1 Quart)
Servings: 9-inch pie
Instructions
Recipe Notes

PRO TIP: A nut pie is underdone (and gooey) if its center moves in waves when the side is tapped. However, it is overdone (and dried out) when the middle is firm while the pie is still in the oven. Remove it from the oven when there's a slight giggle in the center.

A LA MODE IT: Yes, serve slices with scoops, as usual. But to take the pair over the top, fry up a couple of extra bacon slices and crumble over the scoops.

PRO TIP: Malted milk powder is a combination of barley, malt, wheat, milk solids, and sometimes salt. Check the label—although we like a little salt in this frozen custard, you may already be adding some with the malted milk powder and therefore don't need more. Do not confuse malted milk powder with diastatic malt powder, a bread-baking additive with enzymes that break starches into sugars.