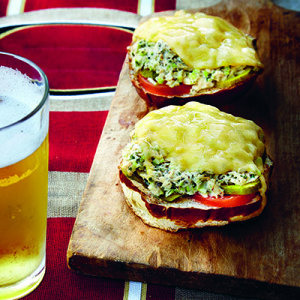 Nate and I love the San Francisco 49ers, and this sandwich refers to three memorable Niner moments.The first is the winning touchdown reception by Dwight Clark, off a Joe Montana pass in the 1982 NFC Championship Game with the Dallas Cowboys, widely regarded as one of the most critical events in NFL history. It sent the 49ers to the Super Bowl (which they won!).

The second happened in 1999, during a playoff game with the Green Bay Packers. Forty-niner Terrell Owens caught a game-winning touchdown pass from quarterback Steve Young to cap a come-from-behind victory that broke a losing streak of five straight play­off losses to Green Bay.

Finally, in 2012, the Niners won another close playoff game against the New Orleans Saints. Quarterback Alex Smith connected with Vernon Davis for a last-second touchdown that put the 49ers ahead.

It may be a bit of hubris, but, for us, this open-faced tuna melt is as memorable as these catches. 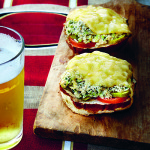