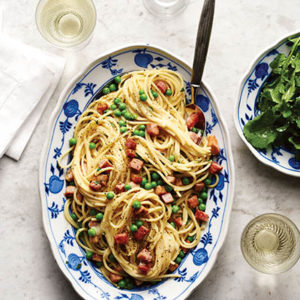 Easter is currently the only holiday I’m “allowed” to host. We cram the whole family (around twenty people) into our 450-square-foot apartment, and I prepare a ham in our tiny kitchen. When it first comes out of the oven we serve it by the slice, and as the day rolls on, we continue picking at it, stuffing it into bread for sandwiches, or rolling it up tightly with mustard. But, let’s be honest, Easter ham is never finished on Easter. In the days that follow, I always look forward to ham and eggs, quiche Lorraine, and, of course, split pea soup made with the ham bone—but even after all of that, there is still more ham to be had! I developed this recipe to use up the gift that keeps on giving. I swap out carbonara’s traditional pancetta for thickly cut ham and throw in shelled fresh peas right at the end for some color and bite—and as a way to welcome spring.

ON-DEMAND: Listen to Faith and Colu talk about this recipe and others from Back Pocket Pasta. 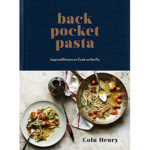 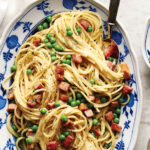 Easter Ham Carbonara
Deli sliced ham is too thin for this carbonara. So if you don’t happen to have leftover ham lying around, ask your local butcher for a ham steak.
Ingredients
Servings: people
Instructions