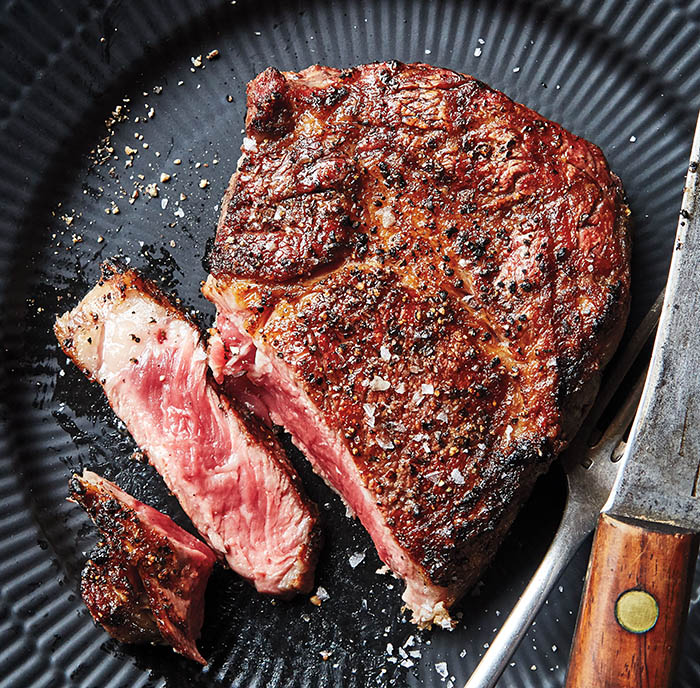 I like to grill large steaks, then serve them sliced. The presentation is dramatic, and it’s fun for everyone to feed from the same communal platter. If your idea of the perfect steak is a juicy slab all to yourself, no problem; just cut the steaks into portions before grilling.

The Perfect Porterhouse or T-bone steak
These are best cut 1-1/2 inches thick and weighing about 2 pounds. For medium-rare, cook for 4 to 5 minutes per side, taking care not to burn the outside; the leaner tenderloin (the smaller of the two pieces on either side of the bone) is best rare, so position it at the outer edge of the fire. After 5 minutes per side, if it is not done and is developing too much char, move the steak to a cooler part of the grill and cook for another 2 to 3 minutes before checking again.

The Perfect Bone-In Rib-Eye
This treat has become one of my favorite cuts to grill: Look for 1 or 2 big steaks, 2 to 3 inches thick, which will clock in at 2-1/2 or more pounds each. Heat the grill for hot indirect cooking. Start the steak directly over the fire, with the bone positioned over the hottest point. Close the lid and cook, turning once, for 5 minutes per side. Move to the indirect side, with the bone positioned closest to the fire, and check the internal temperature. Close the lid and cook until 5° to 10°F shy of the desired doneness, 20 to 40 minutes, checking every 10 minutes or so initially, then more frequently as you get closer to your target temperature; reposition the steak as needed for even cooking. Transfer to a cutting board, let rest, cut away the bone, slice across the eye, and serve with the accumulated juices.

The Perfect Steak with Black-and-Blue Butter
A spin on the steakhouse favorite that works for any of the recipes here: Earlier in the day, cream together 6 tablespoons softened butter, 4 ounces blue cheese, and 1 tablespoon cracked black peppercorns in a small bowl. Roll into a log, wrap in plastic wrap, and refrigerate until firm, at least 1 hour. Cut into 1-inch slices and leave them at room temperature while you heat the grill. Immediately after slicing and plating the steak, scatter the pats on top to melt.

• ON-DEMAND: Listen to Faith talk to Mark about this recipe, as well as others from Mark’s cookbook, How to Grill Everything. • 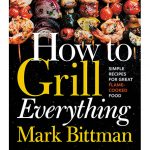 Excerpted from HOW TO GRILL EVERYTHING © 2018 by Mark Bittman. Photography © 2018 by Christina Holmes. Reproduced by permission of Houghton Mifflin Harcourt. All rights reserved. 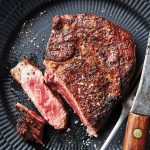 Buying and Grilling Steaks
The cut, how much you like it done, and the best way to cook it are all related. The supermarket meat counter— I mean a good one with an in-store butcher—offers many different steaks. Understanding where they come from on the cow goes a long way to choosing the right one for different occasions. Those cut from muscles on the back and backbone (like the rib-eye, strip, tenderloin, and porterhouse) get less of a workout and are the most tender and mild tasting. Those from active abdomen and hind sections (like flank, skirt, and sirloin) have more chew and can be more flavorful.

Most steak lovers want marbling—that interior lacework of fat that melts during cooking to deliver the rich, silky, beefy experience you expect from steak. Strip and rib-eye— from the same section of the cow as prime rib, only cut between the ribs and sold with or without the bones—are both tender and well marbled. Tenderloin has next to no marbling but its texture is super-soft (some say too much so) and puts up little resistance when you take a bite. Not surprisingly, these are the most expensive steaks.

Other cuts offer more value and excellent eating, so I urge you to venture out of your comfort zone. Try less familiar cuts like hanger steak (the classic cut for making steak frites), flat iron steak (with its unique geometric shape), tri-tip (cut from one of the sirloin roasts popular for regional California barbecue), and cap steak (a somewhat hard-to-find by-product of cutting boneless rib-eyes). You can even have success with oddball arm and blade steaks as long as you cut around the inconvenient strips of gristle. But some cuts—like chuck and round steaks—are deceiving and won’t be tender after quick grilling. Instead they require lots of cooking time or pounding (or both); or they can work cut in small pieces and skewered.

For some grillers, a perfect steak is “black and blue”: charred on the outside and raw enough on the inside to slightly blue-tinged and still cold from the refrigerator. For others, it’s medium-well done—not a trace of pink inside but ideally still fairly moist. I won’t acknowledge well-done steaks as desirable; if you think that’s what you like, try pulling them from the fire just a couple minutes earlier and see if they aren’t better. And everyone else falls somewhere within that spectrum from red to pinkish gray.

If you’re grilling black-and-blue steaks, they should be at least an inch thick, and go from fridge to fire interrupted only by a sprinkle of salt and pepper. (Better yet, put them in the freezer for 30 minutes or so right before grilling.) That initial chill provides a bit of protection against overcooking. Other than that, the temperature of steak when it hits the grill doesn’t make a ton of difference: Inch-thick pieces of meat cook quickly no matter what, and thicker pieces require both direct and indirect fire.

About that fire: Get it as hot as your equipment can manage—500°F or above if possible. For 1-inch-thick black-and-blue, rare, or medium-rare steaks, make a direct fire. For thicker cuts or cooking beyond that doneness, you need both hot and cool zones .

A true black-and-blue steak is a challenge met only with a screaming hot fire. When cooking with charcoal, if you can, shorten the distance between the grates and the coals. With gas, let the grill fully heat. When the grill hits peak temperature, take the steaks out of the fridge, blot them with paper towels, season on both sides with salt and pepper, and get them over the hottest spot of the fire. With gas, put the lid down since the heat will dissipate and the inside won’t cook too fast; for charcoal, keep the lid off for the opposite reason. To keep the inside from cooking, sear the steaks for no more than 2 minutes per side then get them off the grill and check; they should be eaten before carryover heat cooks the meat further.

For rare and medium-rare steaks, start a direct fire—anything over 450°F will do the trick. The idea is to develop a crusty exterior on the steaks, without burning, in the time it takes the interior to cook the way you want it.

Steaks taken beyond medium-rare require searing over direct fire, then finishing over indirect heat. This gives you more control of both the internal temperature and the exterior charring so that the meat is still moist even when there’s little or no pink at the center. You can and should be prepared to move the steaks around and check frequently. For 1-inch-thick cuts, start with 3 minutes searing per side before moving the steaks to the indirect portion of the grill; thicker pieces will require more time.