Cheese blintzes are a special indulgence. It’s not often that we have the opportunity to top a rich, fried, cheese-filled pastry with sour cream and feel like we are doing exactly the right thing. Traditionally served on Shavuot, blintzes were also pop­ular at the many dairy restaurants that once populated the Lower East Side. According to New York legend, cheese blintzes were the favorite food of infamous Jewish mobsters Bugsy Siegel and Meyer Lansky, who were both regulars at the now-closed kosher dairy restaurant Ratner’s.

Reprinted with permission from Modern Jewish Cooking, ©2015 by Leah Koenig, Photos by ©2015 Sang An. Published by Chronicle Books, LLC. 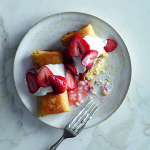 Orange-Scented Cheese Blintzes
This recipe for blintzes includes fragrant orange zest in the sweet cheese filling, making it a standout favorite in my kitchen.
Ingredients
For the blintz batter
For the filling
Servings: people
Instructions