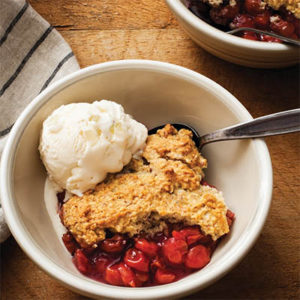 Late one night after a theater performance in New York City, we went to an Italian bakery for dessert and coffee. The woman behind the counter was definitely bleary-eyed. We asked for a couple of cannoli, as well as a slice of vanilla cake with a warm cherry sauce ladled on top. She poured the sauce over the cannoli. We never looked back. Because the cannoli shell got soft under the sauce, we morphed the duo into an American cobbler—Italian ice-cream fandango. Consider it sweetened ricotta and mascarpone with biscuits and a cherry sauce. Consider it ridiculous.

Listen to Mark describe this recipe on The Faith Middleton Food Schmooze®. 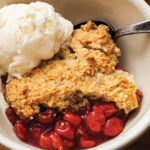 Sour Cherry Cobbler and Cannoli Cream Ice Cream
Cobblers have biscuit toppings—but not always true biscuits. This batter is more like a wet dough, like a super-thick waffle batter. We find that its wetter texture becomes cakier on top of the cobbler, a better fit for the fruit. And to that end, let's say that sour cherry season is very short, just a few weeks in midsummer. If you spot sour cherries at the market, snap them up, pit them, and freeze them in sealed plastic bags to make this combo later in the year. Or use purchased frozen pitted sour cherries. Thaw frozen sour cherries in a bowl in the refrigerator for a day or two, then measure the cherries with their liquid for this recipe. In a real dessert emergency, use canned pitted sour cherries although the flavor will be drastically muted, without the zing of fresh fruit.
Ingredients
For the filling
For the topping
For the Cannoli Cream Ice Cream (Makes About 1 Quart)
Servings: Nine-inch square cobbler
Instructions
Recipe Notes

PRO TIP: To grind almonds, put them in a food processor, cover, and whir away until they're the consistency of fine, dry sand. Or look for ground almonds at high-end supermarkets and health-food stores.

A LA MODE IT: Serve the pair in bowls. The ice cream is pretty soft, even when stored in the freezer, so there's no need to set it out at room temperature before serving.