What is the secret to grilling chicken wings so that they don’t burn or become too dry? Two simple steps will make you a “wing master.” First, make a few slashes across each wing, then combine the wings with a marinade. After two hours of marinating, you’re ready for secret step two…you simmer the wings and the marinade in a saucepan for five minutes or so. As you can see, these tips are about preserving moisture and reducing the chances of burning the wings on the grill or if you’re using an indoor grill pan. Your friends and family might ask for the recipe when they taste them, lip-smacking good from the soy, lemon, fresh ginger, garlic and rosemary in the marinade. 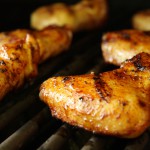 (NOTE: Faith leaves out the jalapeno if kids are in the crowd. You can buy gluten-free soy sauce in supermarkets or health food stores, so the recipe can work for those who are gluten-sensitive. Side-by-side, we can't tell the difference between gluten-free and traditional wheat-based soy, so there is no flavor compromise.)