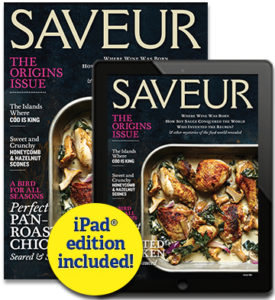 If you’ve been known to rip recipes out of the food magazines in doctors’ office waiting rooms, or you’ve got a pile of food magazines on the kitchen table stacked higher than your fruit bowl, this is the show for you. Editor-In-Chief  Adam Sachs and Test Kitchen Director Stacy Adimando from Saveur magazine join the party for the entire hour to share the backstories to some of the most interesting articles and recipes Saveur published this year. And there’s something special in it for you, too. Because it’s fundraising season, we’ve cooked up a way for you to subscribe to Saveur and support The Faith Middleton Food Schmooze® at the same time. A contribution of $5 a month gets you a full year of Saveur magazine—a magazine we love and learn from every month—and our very sincere thanks.

Get a taste of the recipes from Saveur magazine:
Sicilian Seafood Stew with Almonds and Couscous
Lamb Shanks in Red Wine with Creamy Eggplant
Honey-Glazed Roast Pork with Apples
Honeycomb Einkorn Scones with Hazelnuts and Rosemary
Cornbread Coffee Cake with Fresh Figs and Walnut Streusel