We know it’s the time of roasts, chops and steaks, but we liked the sound of going Italian this year with Steve Martorano’s version of veal piccata, brightened with lemon, Pinot Grigio and capers. We’re going to serve roasted potatoes on the side, and drag every forkful through that veal sauce.

Steve’s fans in Florida and Vegas can’t get enough of this dish at his five restaurants; now we know why. 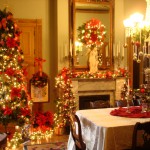