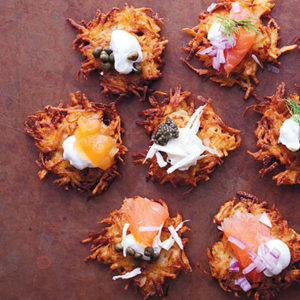 It’s a good thing these latkes are always greeted by gasps of unadulterated glee—from both kids and grown-ups—because I’ve never found a way to make them that isn’t messy and a little laborious. This method, which uses onion powder instead of the standard shredded onion, comes close, but if you’re serving them at a party, definitely make them ahead of time, then reheat, covered with foil, at 300°F for 20 minutes.

I like setting out some sample combos—latke with smoked salmon and capers, latke with caviar and sour cream—to get people started. 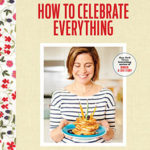 Excerpted from How to Celebrate Everything by Jenny Rosenstrach. Published by Ballantine Books, a division of Penguin Random House. ©2016 Jenny Rosenstrach, photography by Chelsea Cavanaugh.

On-Demand: Listen to our conversation with Jenny Rosenstrach on The Faith Middleton Food Schmooze®. 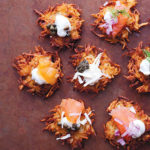 Potato Latkes with Fixins
The recipe makes 18 to 20 small-medium latkes, which is just about right for a family of four celebrating Hanukkah. For a party, double or triple as needed.
Ingredients
Servings: - 20 small-medium pancakes
Instructions