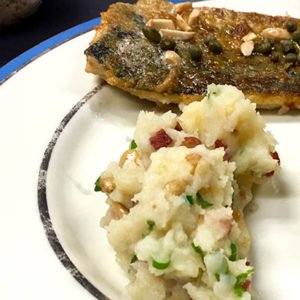 It’s not true that nothing good can come of texting someone in the middle of the night. Faith had the initial idea for these Mediterranean mashed potatoes, and several texts with Chris Prosperi later, a recipe was born. The inspiration behind the recipe was simple: It’s Thanksgiving, and since turkey is such a neutral meat, Faith wanted to create a side dish that would add some interest to the plate. What’s more interesting than salty bits of crispy prosciutto in every bite? The toasted pine nuts—totally worth the splurge, by the way—give the potatoes Mediterranean flair. These potatoes are “loaded” in the best possible way. In one version of the recipe, capers were included. We like that idea if the potatoes are served with fish, but we decided to leave them out when making the dish for a holiday meal.

ON-DEMAND: Listen to Faith and the gang talk about how this recipe came together. 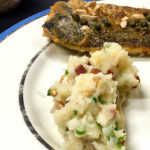 Mediterranean Mashed Potatoes
During recipe testing, Chris added a bit of cream, so The Food Schmooze team tried these with and without the cream. That cream, while not especially Mediterranean, gave the potatoes their wonderful texture.
Ingredients
Servings: cups
Instructions