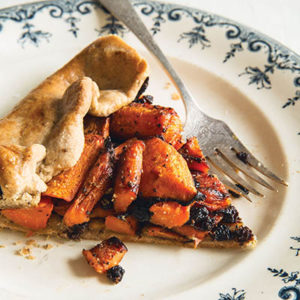 Some of the best culinary inventions have come out of using a few basic pantry items. I had three in mind when I started on this rustic-style tart— celery, raisins, and peanut butter. They form the children’s snack known as ants on a log, and sometimes carrot sticks stand in for the celery “logs.” I worked the seeds responsible for those fibrous green stalks into the crust, which is made with complementary, grassy buckwheat flour. I lined the pastry base with peanut butter and put the orange root veg in the filling with currants; they’re smaller and more tart than raisins, and I prefer them in savory dishes. I liked everything about this crostata, except for the peanut butter. It overpowered the rest. I could have stuck with it, stubbornly clinging to the cleverness of the original reference. But that’s another rule of cooking: flavor trumps. I removed the offending ingredient, and I had a real winner.

• ON-DEMAND: Listen to Faith and Charlotte talk about this recipe as well as how to care for your cast-iron skillet. • 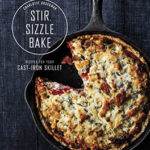 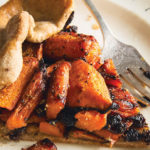 Working with Butter
Unless otherwise advised, if I’m making a butter crust, I cut my butter into ½-inch cubes. If I am going to use a machine like a food processor or stand mixer, I freeze my butter. Those appliances can cut through butter a lot faster than my hands can, but at the same time, their engines add heat to the dough. Just remember, your goal is to keep the butter cold, to distribute it evenly, and to quit while you’re ahead.